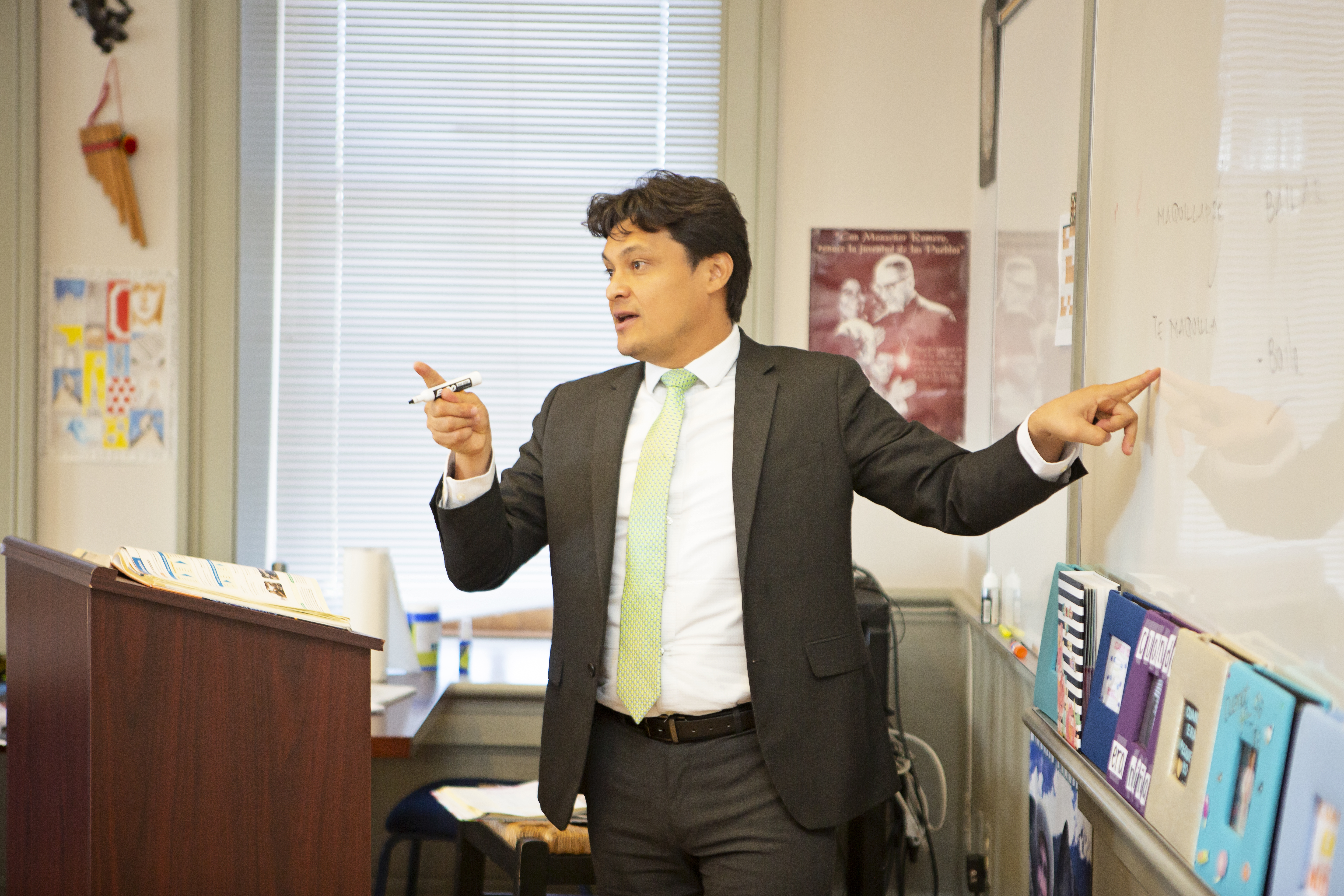 A soccer player and former rock band singer, Spanish teacher and Foreign Language Department Chair Aldo Martinez fills his classroom with the things he loves. Everything on his walls tells a story: the posters, the jerseys, the artwork. It’s how Aldo brings what he loves into the classroom. We sat down with him to learn more:

The Journey
Teaching was not Aldo’s plan when he was young. “As a Latino kid, you had two big dreams: to be a professional soccer player and a rock star,” he said. “I was into music. I still am. I was crazy about rock music as a teenager. I was a singer.” When he was in high school, he saw the impact of role models on students. Then at college, he made the choice: he would teach. “I didn’t change my mind.”

Beyond the Classroom
While he’s no longer the singer in a rock band, Aldo brings music into his classroom, as well as his other passion: soccer. “If you look around the classroom, we just were talking about sports. You see jerseys from my favorite teams,” he said. “We talk about culture. … Everything has a purpose. There is reason why things are hanging on the wall. I connect it with the language.”

Music had a big influence on Aldo when he was learning to speak Italian, and he encourages parents and students to listen to music when learning Spanish. Aldo translated every single song of Andrea Bocelli from Italian into Spanish. “That helped me a lot. I still know how to sing it,” he said. “We just [taught] future tense these past two days. I always connect it with a song. ‘Que sera, sera, whatever will be, will be.’ [Students] don’t realize that it’s sera with the future ending.”

On weekends, Aldo spends time with his family, singing karaoke and fishing. Soccer remains one of his favorite pastimes.

Hospitality
The students are what keeps Aldo in this work. “They are so respectful. So open to new cultures. They have this genuine interest for the language,” said Aldo.

He’s inspired by their perseverance when tackling a new language. “They don’t give up. They keep fighting,” Aldo said. He encourages students, if they’re disappointed in a grade, to come talk to him, and many do.

Hospitality is his favorite Little Virtue, and his classroom is always open. “We have to look out for one another. We have give someone else a hand,” he said.