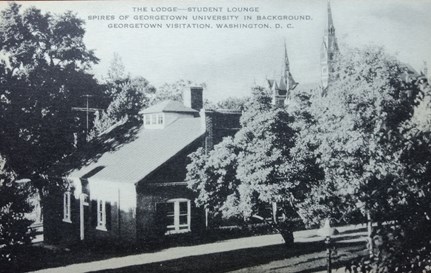 Photographic image of the Senior Lodge's exterior, published on a postcard after 1955

The first published history of Georgetown Visitation was written by Rose Hawthorne Lathrop, who was the daughter to the prominent writer Nathaniel Hawthorne and who went on years later to found an order now known as the Dominican Sisters of Hawthorne. She wrote A Story of Courage: Annals of the Georgetown Convent of the Visitation of the Blessed Mary with her then husband, George Parsons Lathrop in 1895. This book, to be sure, is unlike history researched and written today; but what it lacks in accuracy, it makes up for in its fabulously romantic prose. It begins as an account of the two authors' visit to the school and convent. Here they describe campus buildings, sometimes in great detail, and in so doing also discuss activities that took place within those spaces. To one building, now the Senior Lodge, they dedicate an entire flourishing paragraph:

Passing along an avenue arched by tall sycamores, on our return to the garden, we stopped and inspected the new brick steam-laundry, where all the washing for more than two hundred persons is carried on. Mother was proud to say that it had not required more than three months for the sisters to learn from an engineer the use of the apparatus, so that now the laundry has been conceded entirely to their unaided skill. A strong, large, pink and white cheeked sister was busily stirring the clothes in a caldron, as we stepped in at the door. Very little, to be sure, these sisters care to say to people from the fretted world; and their gentle reserve and downcast eyes (yet happy peace, withal) are very soothing, and suggestive of possible peace for one's self, likewise. The great boiler and engine, indeed, seemed too large to be manipulated by even a stalwart woman; but these monsters of steel and iron really had succumbed to feminine intelligence.

This must be the most extraordinary account of doing laundry ever yet composed. The authors characterize the nun who ran the washing machine as heroically bringing into submission a mechanical formidable beast! These observations were written in the late 19th century, in the wake of the Industrial Revolution, a time in which production methods changed a good many aspects of daily life. Mechanization replaced human labor, but it required training, and even courage, to master newly invented apparatuses, as our authors so wonderfully discern. 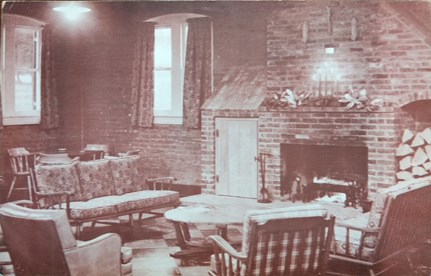 Photographic image of the Senior Lodge's interior, published on a postcard after 1955

Today, our senior class would do well to recall the daring that took place in their little building dating to 1891. I therefore dedicate this little piece of writing to our soon-to-be graduates as they go out into the world and conquer new technological innovations and do laundry in their dorms and apartments. Go forth, then, and embrace equally mundane or complicated tasks with feminine intelligence, gentleness, and bravery! 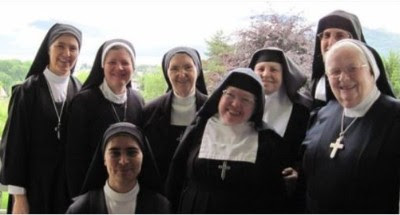